Debbie and I are in Norway, and enjoyed Palm Sunday services at the headquarters church in Stavanger.

The morning service, which was well attended, including by a number of visitors, opened with a mother/daughter duet of “Jesus Wants Me for a Sunbeam.” This was followed by a young violinist playing “Lord, I Lift Your Name on High.” Centering on Jesus’ Triumphal Entry into Jerusalem, the service included a Scripture reading from Mark 11:1-11, an object lesson, and beautiful music, such as “Jubilee” sung by the choir.

A time of prayer followed, and then a very nice dinner was served. For dessert a special cake was brought out, decorated with a picture of the church. This was in anticipation of the twenty-fifth anniversary celebration scheduled for the evening.

The evening service highlighted twenty-five years of the Stavanger church at the Tjensvoll Road location. It included special music, a devotional message, and a testimony shared by Marianne Kinnari. Also, LeRoy Tonning, the Scandinavia District Superintendent and Stavanger pastor, gave a presentation, which looked back to the beginning of the Scandinavian work. It began when Norwegians who had experienced the Azusa Street Revival returned home and shared the Gospel. At first, meetings were held on rented premises, but a meeting house was purchased as early as 1914.

In 1925, the congregation relocated to Bergjelandsgaten 29, and at that time acquired a printing press. Three years later, the illuminated sign which read, “Jesus: The Light the World” was set on the roof of the church, and shone over Bredevannet, the city lake. Initially there was opposition to the sign, but the congregation prevailed in court, and it still shines today. During World War II, Germans occupied the church for three years, and services were held in various locations.

In 1986, the congregation began looking for a new location, and in 1991 purchased the Tjensvoll property. Construction began on a church, and in December of 1993, the first service was held in the new building. It was then dedicated on Palm Sunday, March 27, 1994, with many in attendance, including from Africa, Canada, and the United States.

Brother LeRoy concluded the presentation saying, “We are grateful for the years that we have had at Tjensvoll. God has blessed our congregation and many others who have been in contact with the church.”

The anniversary service closed with prayer. Afterward, Brother LeRoy commented that it was a great day in the Lord. It was a good time indeed. 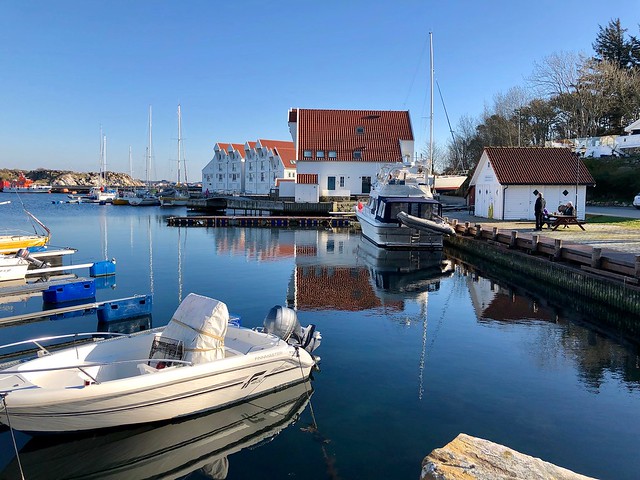