The 2019 Korean camp meeting was held in our Seoul Korea church from August 1-4. Director of Asia Work, Bill McKibben, was there with his wife, Lori, representing the Portland headquarters, and he sends this report:

We arrived safely on Tuesday afternoon and were met by Kim Jeong Min, the Korean District Superintendent. Brother Kim and his wife, Lee Jin Young, were able to attend our Portland camp meeting this year, so it had only been a short time since we greeted them in Portland. It is the end of the rainy season in South Korea and so we were met with temperatures in the eighties to nineties, high humidity, and thunderstorms most afternoons. The showers outside did not dampen the spirit of anticipation as the camp meeting began with representatives from all six of our Korean branch churches, ourselves from Seattle, Washington, and a sister from Richmond, California, who is teaching English in Korea this year.

Wednesday and early Thursday were filled with pastoral and board meetings with the first evangelistic service of the camp meeting on Thursday evening. A vocal group from our Daejeon church brought the prelude followed by the orchestra. A combined choir of about twenty sang in each service. The testimonies covered a great range in age and topic from one elder who was saved forty-five years ago to several children who were saved last week during the Vacation Bible School held at our Busan church. There was victory in every story told. Kang Kyung Yoon, pastor of our Okpo church, brought the evening message on God’s love being constant even in the midst of suffering and trying times. Our Korean saints were taught well by the late missionary Harold Barrett on the importance of prayer. It was evident as every service was followed by fervent heartfelt prayers offered to Heaven.

Friday morning’s Bible teaching was from Colossians 3:1-4 about “Seeking things which are above.” It emphasized that when we are saved we are “dead to sin” and risen to new life in Christ . . . so our hearts and desires are now focused on eternal things. The prelude featured a trio of Busan church members playing on traditional Korean flutes and was quite beautiful. The final special was a soloist from what Brother Barrett used to refer to affectionately as “our country church” in Agyang.

Friday afternoon was filled with a Young People's Forum with many questions and answers concerning Biblical perspectives on topics such as marriage, relationships, and education, along with many others. There was also a ministers’ meeting and training session, which was followed by a special dinner with all the ministers.

Friday evening’s prelude was a special treat with a Nigerian sister singing in both English and Korean. She is studying in Korea with her husband who we met at last year’s camp prior to their marriage. After the choir sang, once again many rose to give God glory in testimony. One man testified how just last year he surrendered his life to Christ and was so happy that his life is changed and his family is now being raised in a Christian home. Before Seo Ok Soo, pastor in Agyang, brought the message, a sextet from our Seoul church sang. Brother Seo’s text was from Luke 19 about Zacchaeus. He mentioned that he identified well with the story because Zacchaeus was short and he also is short. In addition, both of them wanted to see Jesus. He emphasized that Jesus came to seek and save the lost. A sweet prayer service followed.

Saturday morning’s Bible teaching began with a male quartet from Busan followed by the orchestra. The saints certainly love to sing, and each service has had joyful singing accompanied by the orchestra of both traditional hymns and also some choruses. After more testimonies and a final special from our Okpo church, Choi Ik Jin, pastor of our Daejeon church, taught on the topic of “Worship.” His main emphasis was that we must worship God both in spirit and in truth, and that worship must be more than just at church; it must be lived out in our daily lives. A larger crowd was present now that the weekend had come and many prayed as it was their first service of the camp meeting.

Saturday afternoon we celebrated with the ordinances of the Lord’s Supper and Washing of the Disciples’ Feet. Ra Young Do, pastor in Busan, brought the first message, and Kim Sang Gyu brought the second. There was a sweet and sacred spirit as the saints remembered Jesus’ death, resurrection, and promised return. Then there was joy as the brothers washed each other’s feet. Sister Lori says there was joy among the sisters as well. All joined together next to celebrate the water baptism of ten new converts. The baptismal message conveyed that at salvation we have a new life in Christ and are no longer bound by sin. We can rejoice as members of the family of God. There was much rejoicing as we all journeyed to the baptistery which is on the roof of the four-story Seoul church. Just as we began to baptize it also began to rain but all stayed to rejoice at the testimony of these new believers. Not only was everyone wet by the end of the service, but all were filled with the joy of the Lord.

Saturday evening’s service began with a saxophone solo by a brother from Seoul followed by a beautiful duet from Busan. The music special prior to the sermon was a group from our Daegu congregation who sang “I’d Rather Have Jesus.” It was quite touching. Brother Kim Jeong Min, who is also the pastor at Seoul, brought the evening message. His text was from Mark 1:15, which quotes Jesus saying, “Repent ye, and believe the gospel.” He explained how the world is in great need of a Savior. The Gospel message reaches out, asking us, “Where art thou?” just as God did to Adam and Eve in the Garden of Eden after they sinned. Many prayed deeply and for a long time following the service with the Holy Spirit quite evident as hearts consecrated to the Lord.

Sunday morning began with Sunday school followed by the final service of the camp meeting. Ahn Bong Ae, the wife of our Daejeon pastor, had directed the combined choir for each service and this morning's music was simply beautiful in preparing each heart for God’s Word. The message was from the Book of Joshua concerning Caleb and his son-in-law, Othniel. It emphasized that the older generation must stay faithful to conquer the mountains God has promised them, but they also must issue a challenge to the younger generation as Caleb did. The Gospel must go forward until Jesus returns, and it is the responsibility of each generation to carry their part. A good prayer service followed, and many made consecrations prior to departing to each particular station or post of duty in God’s kingdom.

After lunch, everyone joined in the sanctuary for a camp photo and both joyful and tearful goodbyes. Please continue to pray for the work of the Lord in South Korea.

The McKibbens depart for home in Seattle today with hearts of gratitude for the sweet spirit and loving hospitality felt at this year’s Korean camp meeting. 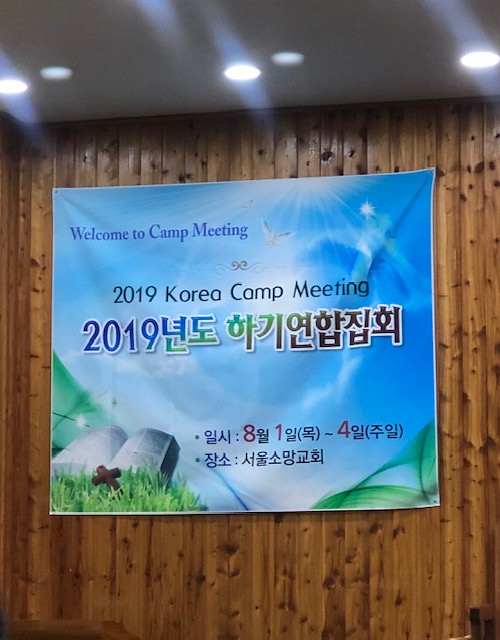