Thankful for the Great Time of Fellowship in Africa

The Minna church dedication took place on Wednesday morning. The photo below is from that event.

In Abuja, a ministers’ and workers’ meeting was held at the headquarters church on Thursday. Bayo Adeniran, James Olaleye, and I arrived an hour early and had time to tour the building. Since my previous visit in 2012 for the dedication, several final improvements had been made, including very nice landscaping.

After the tour, we went back outside and came in again, so we could be formally welcomed by several precious children who presented us with flowers and recited a greeting. Then we went into the ministers’ and workers’ meeting, where the theme of “Unity” was again emphasized as it had been in previous meetings during this trip.

An evening evangelistic service immediately followed. It began with a selection by the brass, a vocal duet of “If You Only Knew Him,” and the choir singing “Send a Great Revival.” Then, a short dedication and ribbon-cutting ceremony was held for a new organ that had recently been installed. The organ, which was covered, was not unveiled until after the ribbon was cut at the declaration of, “We dedicate this organ in the Name of the Father, and of the Son, and of the Holy Ghost.”

The service continued with congregational singing, two-minute testimonies, and before the message, a vocal solo of “My Sins Are Gone.” At the altar call, nearly everyone stayed to pray as is customary in Nigeria.

Following the service, a late dinner was hosted for about two dozen ministers and their spouses. We used this time to exchange greetings and say our goodbyes. I boasted of the Portland saints to those here, and I when I return home, I will boast of the African saints to those there.

I am scheduled to begin the flight home on Friday. It has been a great trip in every respect. We thank God for His presence in the services, safe travels, and wonderful fellowship together.

(Click on the image above to view the album of photos from this trip to Nigeria.) 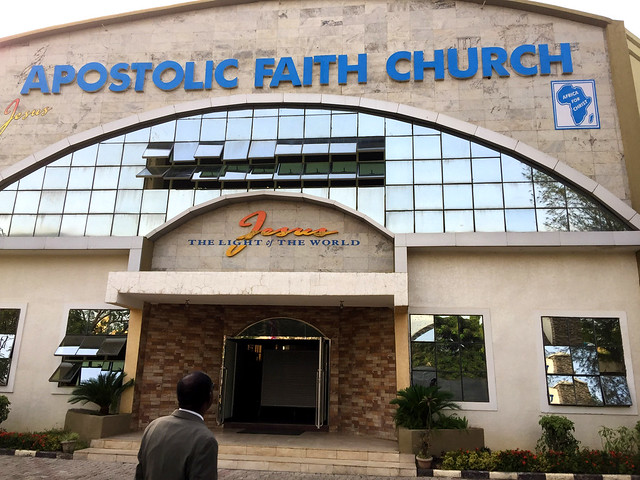