Harlan Lee of Roseburg, Oregon, and Wayne Butler of Port Angeles, Washington, recently returned from Romania where they attended the annual ministers’ conference in Zadareni and also visited many of our churches in the western and southern regions of the country to encourage the saints there. For the first several days, they were joined by Brother Wayne’s daughter Crystal Kinnari of Stavanger, Norway.

After everyone was welcomed by Gheorghei Macovei, the Eastern Romania District Superintendent, opening remarks were given by Oliver Zan, the Bulgarus pastor. Using Psalm 116:1-5, he emphasized that God is full of mercy. Then prayer was offered for the team which would travel among our Romania churches in the upcoming days. Ted Bora, the team interpreter and Western Romania District Superintendent, read the testimony of Brother Harlan’s dad (and mine), Darwin Lee, who had passed away two weeks earlier. Brother Harlan used the opportunity to thank the ministers for their continued prayer support of the Lee family.

A time of singing praises followed, and then the remainder of the morning session centered on verses from 1Timothy 3:1-7, including exhortations on the topics of “Heeding the Warning” and “The Holy Spirit, Our Guide.” After lunch, Nicolae Cacalete, the pastor from Capu Dealului, spoke on “Guarding Against Greed,” and then Benjamin Cret, the Gottlob pastor, gave a message on the topic of “Pride.”

During the evening session, the band from Gottlob played several numbers including “Onward Christian soldiers” and “What a Friend We Have in Jesus.” Also, Pavel Balanoiu, who leads the southern Romania work, shared news of the recent efforts in Craiova where he is the pastor. He said the congregation has been gathering for “prevailing prayer” as several have a hunger for the baptism of the Holy Ghost. This hunger has spread to other locations, and several have received the blessing. Everyone rejoiced in his report. After several more vocal numbers by the Gottlob brass band , Brother Oliver closed with a message from 1 Samuel 7:12, encouraging those present to find a personal “Ebenezer.”

On Saturday morning, the conference continued after a time of prayer. The first session included the singing of worship songs such as “Awesome God” and a message from Florin Silea, who pastors at Teremia Mica. Also, a duet from Margaritesti sang a beautiful song with the lyrics, “I only want to dwell in God’s house.” In the afternoon, Brother Macovei led a session on “Hypocrisy,” Brother Harlan on “Overcoming through Unity” from Psalm 133, and Brother Wayne on “No Compromise,” using the example from Daniel of the three Hebrew children.

On Sunday and Monday, the team visited our churches in the western Romania region. First, they went to Bulgarus, and enjoyed a morning devotional service. Then they traveled to Teremia Mica to worship with the saints there, and were especially impressed by the progress of the youth orchestra. They were also happy to hear that several in the congregation had been able to get local jobs, and would no longer need to travel to nearby countries for work. Next, they went to Gottlob for a service. Again, they were impressed by the music—both the brass band and orchestra performed several numbers, and the young people sang. The last service in this region was at the Sanpetru-German church on Monday. All of the services were followed by wonderful prayer meetings and times of fellowship. And the saints at each location asked that their warmest greetings be sent to Portland.

The team drove to Motatei Sat on Tuesday, February 19, to visit with the pastor, Mitita Udrea, and his wife, Maria. Their eighteen-year-old daughter has been diagnosed with cancer, and they are looking to the Lord to heal her. After a time of fellowship, they were joined by thirteen others for an impromptu church service. Brother Macovei opened the service, Brother Wayne gave an exhortation, and then Brother Harlan closed with verses on the subject of “Touching Jesus.” Congregational singing was interspersed throughout, and Brother Harlan said it was a sweet service. Afterward, as Sister Maria was being anointed and prayed for, the Spirit fell in a mighty way.

The team traveled on Wednesday morning to Osica de Jos where Voicu Constantin is the pastor. Most of the congregation members were working, but eight were able to meet them at the church. They sang hymns, including “There Is Power in the Blood” before hearing a message from Philippians 1:3-7 on recalling the past and being assured that “I have you in my heart (verse 7).” A second message was also given, this one from Matthew 10:28-32, emphasizing verse 31: “Ye are of more value than many sparrows.” It was a blessed time, with several shedding tears throughout the service.

Margaratesti was the next church location visited. The team was treated to lunch by the pastor, Aurel Cruceru, and his wife. The team learned that there is closeness among the young people from Craiova, Ghindeni, Margaritesti, and Motatei Sat, and this is a source of joy for the congregations. After a quick rest, they made a visit to Ghindeni before returning to the hotel.

On Thursday, the team attended an evening service in Craiova where the congregation had been holding “prevailing prayer” meetings. They were told that not only was this congregation praying, but visitors had been attending from other churches which did not have altar services. Brother Pavel gave the first message, taking his text from Acts 1:4-8. This happened to be the same Scripture reference Brother Harlan was planning to use. When he went ahead with his message next, the congregation understood that the Holy Spirit was leading, and many began to rejoice and weep. A great prayer meeting followed, and then Brother Wayne was asked to preach. He drew from Revelation 3:5, “He that overcometh, the same shall be clothed in white raiment; and I will not blot out his name out of the book of life, but I will confess his name before my Father, and before his angels.” He encouraged everyone present to hold fast to the Gospel, so that one day Jesus would confess their names before the Father. A second great prayer meeting followed, and when it was time for the team to leave, no one wanted the service to end, though it had continued for three hours.

The next day, the team went to Capu Dealului for a service, and the saints were very excited to receive them. Brother Harlan greeted the congregation, which had filled the church to capacity, and gave a word from Psalm 124. Then Brother Wayne shared a message from Revelation 21:7. The service was followed by a time of prayer, congregational singing, and fellowship over homemade donuts.

Three inches of snow covered the ground on Saturday as the team traveled back to Bucharest in anticipation of the Sunday services. After arriving in the evening, they received a phone call from Brother Pavel letting them know that thirteen in Craiova had received the baptism of the Holy Spirit!

They concluded the trip on Sunday, February 24, with services at the Bucharest church where everyone was rejoicing in God’s faithfulness, and the work He is doing among the Romania saints. 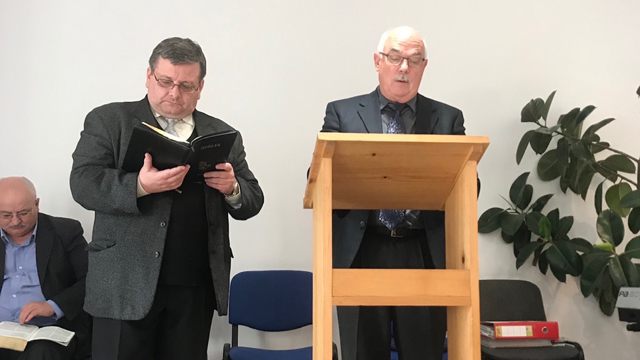