The congregation in Tromso, Norway, celebrated their ninetieth anniversary with two days of special meetings held August 31 to September 1. Invitations were distributed prior to the event, and many visitors attended, including representatives from neighboring churches.

LeRoy Tonning, the Scandinavia District Superintendent, was also in attendance, and preached during a service held on Saturday. In the sermon, he told about the many beautiful churches he had seen while in Denmark this past year, noting that they were well-maintained, but hardly used. He said the house of God should be well-maintained, but more importantly, it should be filled with people and the Spirit of God.

The Saturday activities also included a presentation on the history of the Tromso work given by Steiner Bruvoll. He said the work began with three women (Tora Garde, Anna Folgero, and Ingeborg Johannessen) who were part of the congregation in Stavanger, Norway. They felt called to move to Tromso and unite people who had been corresponding with the Apostolic Faith in Stavanger and in Portland, Oregon. Seven days after their arrival, things were not going well. They had found no contacts, were nearly out of money, and had no place to stay. However, they prayed and then read about Joshua marching around the city of Jericho on the seventh day and gaining the victory. They were encouraged, and shortly thereafter met their first contact. They rented a grocery store at Vestregata 34, and held their first meeting in July of 1929.

The congregation still meets in the original location. Over the years, the building has been updated. Most recently, the sanctuary, foyer, and restrooms have been renovated.

Two services were held on Sunday and both featured beautiful music. Among the specials were a flute duet, baritone solo, and several organ pieces. In addition, vocal ensembles sang in English, Norwegian, and Yoruba. One attendee commented that the Spirit of God was the same in every language, bringing unity.

In the Sunday morning service Hanne Hansen preached. She has led the Tromso congregation since 2010. She and her husband, Ragnar, have gladly given themselves to the service of the Lord. In the afternoon, Bamidele Opeifa preached. Originally from Nigeria, he and his wife, Lola, moved their family to Tromso from England in 2017. Their three sons have been a blessing to the congregation through their musical talents.

Between the Sunday services, lunch was served in a room that had been beautifully decorated with fresh flowers, and everyone enjoyed a delicious meal as well as good fellowship.

As the saints in Tromso look back on ninety years of service and God’s faithfulness, they also look forward, hoping to be a light to their community for many more years, should the Lord tarry.

(Mouse over the image below to click through album.) 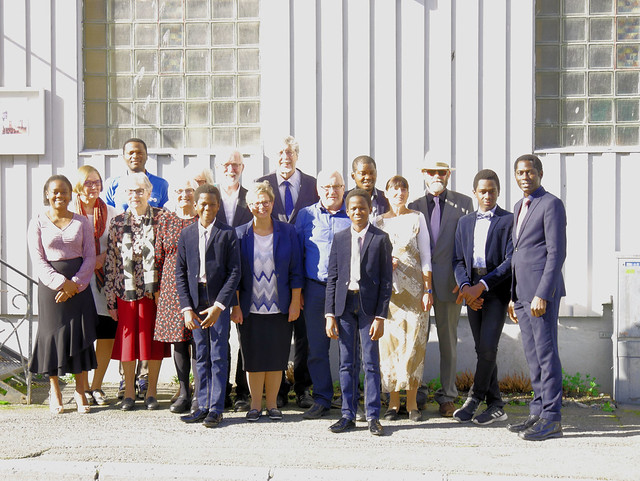