The United Kingdom (UK) camp meeting came to a close on Sunday, July 28, after a wonderful week of God’s blessings and fellowship through various activities.

During the week, we enjoyed visiting with delegates from Belgium, France, Germany, the Republic of Ireland, Kazakstan, Nigeria, Spain, the United States, and parts of the UK including England, Northern Ireland, Scotland, and Wales.

Bible teachings were held on four mornings with compelling topics such as “Be Ye Reconciled to God,” by Isaac Adigun, the UK District Superintendent; “God’s Will,” by Mark Mfandarahwa, the Midlands and NW England Regional Superintendent; and “Living a Life of Faith” by Isaac Sodipe of Peckham, England. On Thursday, I spoke on “Unity without Compromise.”

A different activity was held each afternoon, including a ministers’ and workers’ meeting on Monday, children’s church on Tuesday, a music workshop on Thursday, and a youth service on Friday. In addition, a pre-marriage and marriage seminar was held on Friday. During it, I surprised Debbie by asking her to come to the front and be interviewed. She did a great job and the seminar was well received.

Wednesday afternoon was reserved for a special outing. First-time camp meeting attendees and international guests were treated to a field trip to nearby Newtown, which despite the name dates back to the thirteenth century. Among the attractions are museums and art galleries.

In the evenings, evangelistic services were held, and we were inspired by the music, testimonies, and messages. The sermons included the topics of “God’s Appointed Time,” “Jesus Stood Still,” “The Wages of Sin,” “God’s Support,” and our camp theme, “Get Out.” Among the testimonies, was one from a woman who had been a devout Muslim. She was a staunch defender of that faith until one day she found a tract and read, “I am the way, the truth, and the life” (John 14:6). God used it to speak to her heart, and she repented and received salvation. In another testimony, a young man thanked God for his parents. They were both diagnosed with cancer this past year and went through surgeries. It was a difficult year, but God helped them through, and now after much prayer, they are both cancer free.

On Saturday morning, we held an ordinance service, during which three ministers were ordained: Toyiin Emitola, pastor at Manchester, England; Adeniyi Olayisade, assistant pastor at Peckham; and Lazarus Simbanegavi, minister at Manchester. We laid hands on these and prayed the Lord would guide them in His service. In the afternoon, we gathered outside at the swimming pool for a water baptismal service. Everyone was joyful as we witnessed twenty baptized in water.

Our final camp meeting service began with a children’s program emphasizing the necessity of putting on the whole armor of God. This was followed by the Midland and NW England Region orchestra playing “Jesus Shall Reign” and “Minuet.” Several more music specials followed including the choir singing a version of “Praise Ye the Lord” written by Victor Okusanya, the pioneering pastor of the UK work. The message was taken from Joshua 1:6-8, and centered on “The Unfailing Promises of God.” It was a good ending to a good week at camp meeting.

Debbie and I are now traveling to Spain where we have a group that has been meeting since 2005. Our hope is to spend some time with them and then travel to the Netherlands where there are two more Apostolic Faith groups. 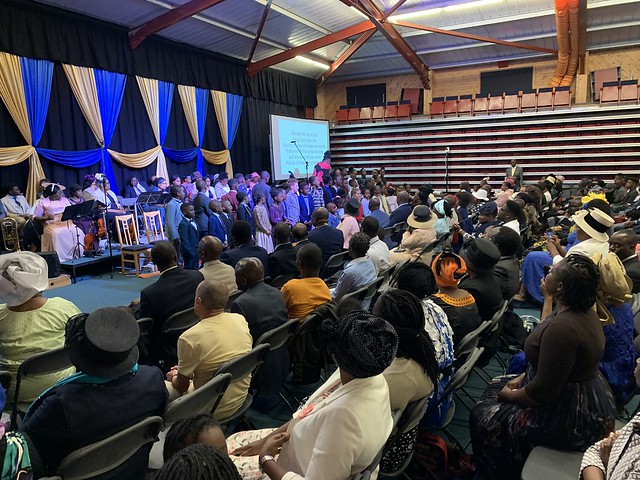