Visiting the Saints in South Africa

Debbie and I have been in South Africa for the past several days. We arrived in Johannesburg on Wednesday, December 4, and were met at the airport by a small delegation including Onias Gumbo, the Southern Africa District Superintendent, and his wife Evelyn; and Confidence Nemahungani, the South Africa District Superintendent, and his wife Monicca. We were joined later by Grey Thibela, the pastor at Wattville, and his wife, Lydia, who are hosting us.

On Saturday, we drove to Polokwane for a minister and spouse meeting. We received a warm greeting at the hotel where the meeting was to be held. As we arrived, several young people were holding welcome signs, one of which read, “These are the hands that prayed for your safe arrival.” Another rightly stated, “We are one.”

Inside the hotel, a banquet reception had been prepared, and about forty ministers and their wives were excited to welcome us. The reception began with an exchange of short greetings, which were interspersed with singing. The songs were in the local language, and sung with enthusiasm. It was a fun start to the rest of our time together.

The next day, we went to the Makgofe church near Polokwane for services. After Sunday school, the morning service opened with a youth instrumental ensemble. Then the choir sang “To God Be the Glory” as well as two songs in the local language.

Following the congregational singing and prayer, a special guest was acknowledged: the brother of the chief (similar to a king) who donated the land that the church is set on. The chief was not able to be present due to illness, but his brother and four tribal council members were representing him.

Debbie and I were also acknowledged, and I conveyed greetings on behalf of the Portland world headquarters. Then Debbie shared her testimony.

The service continued with a youth ensemble, which numbered about twenty, singing “Lord, I Want to Be a Christian.” After the Scripture reading, Bonisille Mashau, who attended the Portland camp meeting this past summer, sang “What a Day That Will Be.” The sermon, which was interpreted, was followed by a good time of prayer, and then everyone met outside for group photos.

We enjoyed our time in South Africa and are now preparing to travel to Zimbabwe to attend the camp meeting in Bulawayo. Thank you for your prayers. 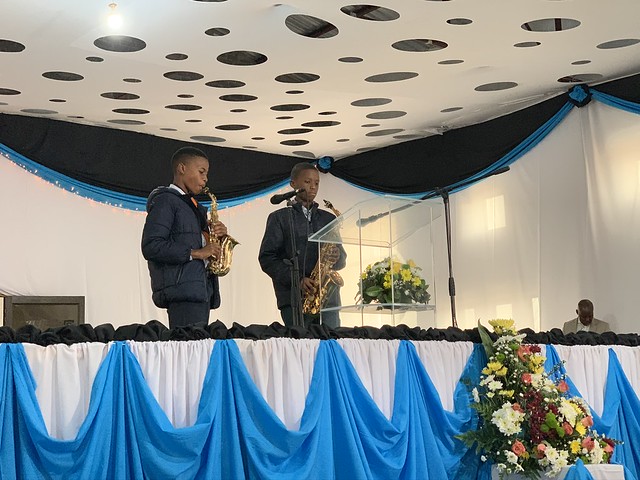