A week of youth revival meetings was held at the Apostolic Faith Church in Washington, D.C., on October 13-20. The theme was taken from Matthew 4:19, “And he saith unto them, follow me and I will make you fishers of men.” At the opening service, youth leader Blessing Mbang preached on how the Holy Spirit first brings people to church and then to the altar to be saved. Then God continues to draw them into a deeper walk with Him. Just as Jesus asked Peter, “Lovest thou me more than these?” after one is saved, his love for Jesus must grow. From Hebrews 10:38, Sister Blessing encouraged the youth not to look back but to run forward and to press toward the mark of the high calling of God.

The week-long revival continued with a prayer meeting on Monday evening and evangelistic services on Tuesday through Friday evenings. On Tuesday, Reverend Eli Segres spoke from John 10:10 saying, “Stay with Jesus because He has the light that leads to eternal life.” He concluded by stressing that money and material possessions are for this life, but at death each person must have Jesus Christ! The sermon drew many into prayer after the service and afterwards a nine-year-old girl testified that she had given her life to Christ.

On Wednesday, Esther Ajayi, who is a youth minister, reminded the congregation that that call of Jesus is twofold: first to the sinner for salvation, and second to the believer to continue walking with Christ. She pointed to the example of Jesus calling the disciples in Matthew 4:18-20, which ends, “And they straightway left their nets, and followed him.” She challenged her listeners to heed the call of God immediately. Sister Esther said that following Jesus is not like playing a game where one can sin and then receive forgiveness by offering an empty apology, because God is not a joker.

On Thursday the guest speaker, David Ekpen from Birmingham, Alabama, joined the group along with his wife, Priscilla, and their two children. Brother David spoke gravely and passionately as he preached from Psalm 133:1-3 and 1 John 2:9-11, admonishing that saints of God must walk in obedience to the Word of God. He said that following God meant walking in unity with other believers, and noted that when the disciples did that, the power of God fell on them. He closed the sermon by exhorting the group to have the spirit of love.

For the Friday evening service, visitors included delegates from the branch church in East Bridgewater, Massachusetts, as well as the pastor of the church in Philadelphia, Reverend Ene Ekpin, and his wife, Eunice, who also happen to be the parents of the guest speaker. For his sermon, Brother David preached from Psalm 34:1-6 and spoke about difficult times in the life of David, the son of Jesse. The title of the sermon was “He Promised” and his listeners were encouraged that no matter how difficult their situations are, God will is there with them. Circumstances in one's life may not always be a bed of ease, but “greater is he that is in you, than he that is in the world” (1 John 4:4). Closing with Psalm 34:6, Brother David challenged the young people to cry out to the Lord, for He will hear.

On Saturday, many more people joined from branch churches including Oceanside, Brooklyn, and the Bronx, New York, and Richmond, Virginia. It was a sweet time of fellowship and the meeting opened with singing songs of praises. Carrie Keju, a minister from Washington DC, taught about social media. She had vivid illustrations that made the teaching very lively. In one demonstration, to show that there were right ways and wrong ways to use social media, she showed a McDonald’s combo meal and asked the congregation their preferred way to eat such a meal. People shared different opinions and then Sister Carrie asked, “Why not eat them all together?” Bit by bit, she put the burger, fries, and soda into a blender and turned it on, amid many protests! It was a powerful visual lesson about how the potential for good in social media can be misused and turned into something bad. She also encouraged users of media not to become vain or abusive in their posts because such behavior destroys something precious within. As she spoke, she chopped up beautiful fresh roses to emphasize her point.

Sunday morning, the church was full. Words of encouragement were given by the Washington DC pastor and District Superintendent of East Coast churches, Reverend Josephine McElveen. Other speakers included Reverend Johnny Wyatt, the pastor from Brooklyn, New York, and youth leaders and ministers from Wharton, New Jersey; Oceanside, Brooklyn, and the Bronx, New York; and Reston, Virginia. Angelis Ortiz from the Bronx glorified the Lord for His strength and grace, saying that she did not consider herself to be worthy to serve as youth leader, but God made it possible. Sister Priscilla gave her testimony, sharing how she had been in a terrible accident that left her with shattered bones in her hip and neck and confined to a wheelchair for months, but God had raised her up. She then sang the special song, “Mercy Said No.” It was powerful and the congregation felt the touch of the Holy Spirit, joining her in singing.

For the final message, Brother David spoke from Daniel 3:24-25 about Shadrach, Meshach, and Abednego, who were young men and friends of Daniel and believed to be of royal lineage. He said young people go through troubles, but God will always help them to overcome. However, to overcome, one needs to be in touch with the power of God—not merely a form or fashion of some power, but the power of Almighty God. Shadrach, Meshach, and Abednego had that power on the inside, which enabled them to stand and to be victorious, and that is what people still need today. He closed saying, “My prayer is that that the love of God will keep you.”

The Youth Revival 2019 was a time of fellowship and consecration. The prayer of the congregation in Washington DC is that God will perfect His work in the hearts of all who attended the meetings. 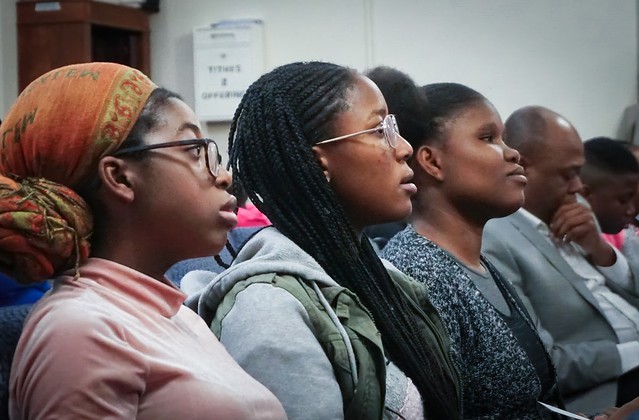