Online special meetings were held at the Apostolic Faith Church in Wharton, New Jersey, from Sunday, August 16, through Sunday, August 23, with a limited number of people attending in person. The theme verse was taken from Revelation 22:12, “Behold, I come quickly.” The opening service began with an instrumental ensemble playing “He the Pearly Gates Will Open,” followed by “Fairest Lord Jesus” with “He Is Coming Again.” A vocal solo, “When We See Christ,” preceded the sermon. Taking his text from Genesis 18:2, Glory Thomas, the pastor in Orlando, Florida, preached on the “Fullness of Time.” He brought out that Jesus wants everyone to be ready for His coming at all times, and emphasized the need for holy living. An online prayer meeting was held after each service.

On Sunday afternoon, there was a children’s service featuring instrumental specials, recitations, and singing. Daniel Adewoyin gave the message on “Walking with Jesus.” He assured the children that they would receive a crown if they walk faithfully with the Lord.

The evening service began with a trumpet solo, “Crown Him with Many Crowns.” A quartet then sang “In the Twinkling of an Eye.” Before the sermon, a soloist sang “Be Standing, Watching, Waiting.” Bob Downey, Director of North America Work, admonished the listeners to endeavor to be ready for the coming of the Lord, citing examples of people he knew, including his parents, who had passed on to glory with the assurance that they were ready to go. Citing the theme verse, he encouraged everyone to declare from their hearts, “Even so, come quickly, Lord Jesus.”

Monday and Tuesday evenings were devoted to youth prayer meetings led by Robert Makasi and Samuel Bamgbose, respectively. Both prayer sessions were filled with the presence of God.

The Wednesday evening service was titled “AFC Night” to commemorate the Gospel pioneers of the Apostolic Faith organization. The service opened with an instrumental prelude, “Jesus, Lover of My Soul,” followed by a cello solo, “An Ear to Hear.” Then a quartet sang “The Light of the World Is Jesus.” The congregational songs were selected from the “Apostolic Faith Hymnal,” and there was a recorded testimony of the late Florence Crawford, the founder of the Apostolic Faith organization. The recorded solo preceding the sermon was titled “Prevailing Prayer.” The recorded sermon titled “Ye Must Be Born Again” was given by the late Raymond Crawford, who became the leader of the organization after his mother passed away. He took his text from John 3, describing the encounter Nicodemus had with Jesus at night. Even though Brother Raymond’s message was given in 1962, it is still relevant today as it emphasized the need to have a born again experience in order to make Heaven our home.

The Thursday evening service was devoted to the youth. It began with a piano special followed by a trumpet solo, “In My Heart There Rings a Melody.” A quartet then sang “Wonderful, Merciful Savior.” After a testimony, a special titled “Christ Will Hold Me Fast” was presented. Timothy Ajayi, the youth leader in Oceanside, New York, took his text from Mark 10:17-22 about the rich young ruler who came to Jesus asking what he must do to inherit eternal life. Brother Timothy brought out that if young people will make the effort and sincerely seek for what they need from God, He will be faithful to reveal to them what they lack in order to be prepared for Heaven.

The Friday evening service began with a flute solo, “Therefore the Redeemed of the Lord.” A duet then sang “Moment by Moment,” and the special before the sermon was “Saved by Grace.” Josephine McElveen, District Superintendent of the Southern and Eastern Churches, used Revelation 22:6 for her text, and emphasized the need to pay close attention to God’s Word. She stated that some of Jesus’ last words were “Behold, I come quickly” in Revelation 22:12, and she exhorted everyone to be ready for that day.

Because of the COVID-19 pandemic, there was no music concert on Saturday evening. Instead, a compilation of numbers from previous music concerts held between 2015 and 2019 were played online, with the theme “Flashback Concert.” The selections included performances from the Wharton Apostolic Faith Church, as well as contributions from nearby branch churches. During the intermission, the testimony of Debbie Lee (wife of Darrel Lee, Superintendent General) was replayed from the Wharton dedication concert in 2017.

The concluding Sunday morning service began with an instrumental quintet playing “Christ Returneth” and “When the Battle’s Over.” A sextet then sang “I Can Almost Hear the Sound of the Trumpet,” accompanied by a trumpeter. Before the Scripture reading taken from Revelation 22:1-7, a quartet sang “Will Jesus Find Us Watching.” Preceding the sermon, the special was “The King Is Coming.” Sister Josephine read Hebrews 11:1, 6, and 8 for her text and likened a Christian’s walk to Abraham’s journey of faith to a “city which hath foundations, whose builder and maker is God.” She encouraged the listeners to endeavor to obtain their “spiritual passport” in order to be ready to meet Jesus in the air when the trumpet sounds.

The evening fellowship service began with an organ duet, “Master, the Tempest Is Raging.” Then a flute and trumpet duet played “Holy, Holy, Is What the Angels Sing.” Later, a mixed quartet sang “Days of Elijah.” Following a testimony, a duet sang “He’ll Understand and Say Well Done.” Brother Darrel took his text from Luke 12:35-40 and stated that even though there is a specific time when Jesus will come, there is life to be lived before that happens. He emphasized three ways that believers can prepare for the Rapture of the Church—beware, be discerning, and be ready.

The special meetings were truly an inspiration to all, and many shared how God had blessed their souls. The prayer is that God will find everyone who attended faithful and ready for Jesus’ soon coming! 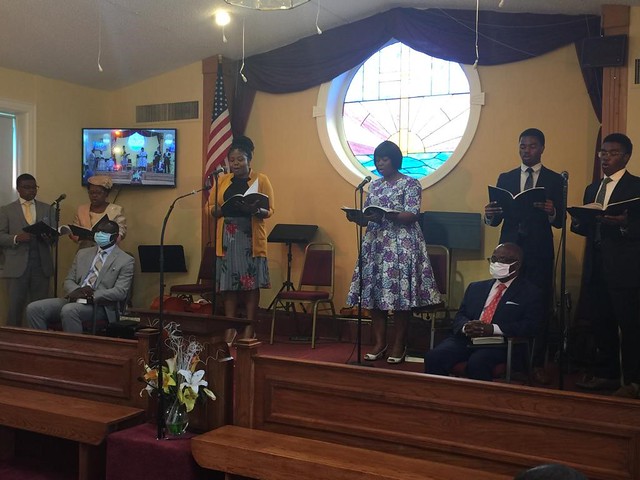