The Downeys continued to visit our St. Vincent churches this past week, and on Wednesday worshiped with the saints at our Greggs church. It was a special day for the pastor, Warrican James, who was celebrating his forty-second anniversary in the Gospel. The building was nearly full with about one hundred attending, including some from our neighboring branch churches. Brother Bob said the enthusiasm that had been present in previous services was evident here as well, especially in the singing and in the prayer at the altar following the service.

Thursday, they took a ferry to the island of Bequia, which is seven miles square and has a population of about four thousand. When the Downeys visited eight years ago, the congregation was meeting in a rented building as the original church had flooded and was damaged beyond repair. Since then, they have purchased the land where they were renting, and are building a new church on the site.

A brother from St. Vincent, who is a contractor, is overseeing the project. Others from that location have also taken part. The crew has completed phase one, a sanctuary measuring thirty by thirty feet. They have also started phase two, expanding the sanctuary to sixty feet, and are preparing to put the roof on next. In phase three, they plan to add rooms in the basement. The Downeys were impressed with the progress and the look of the building. Brother Bob said the church is located on a steep hill, so when it is finished, it will stand out like a lighthouse.

A service was held in the completed portion of the building where a large banner hung over the platform proclaiming, “Jesus, the Light of the World.” Also on the banner was Jude 3. About thirty-five were in attendance. The pastor is Lincoln Ragguette. His wife led the song service and also provided a vocal solo of “You Know Nothing Until You Know the Love of God.” Brother Bob said they enjoyed a sweet service followed by a wonderful time of prayer, during which several were anointed and prayed for to receive healing.

A weekend youth convention began on Friday evening with a service at our Lowmans Hill location where Martin Laborde is the pastor. Though it was very blustery outside and the wind could be heard howling throughout the service, the church was full and the service was enthusiastic. For the first special a young lady sang “Oh How Sweet,” and before the message another young lady sang “I’m a Child of the King.” Brother Bob gave the message, encouraging the young people to follow God’s call for their lives.

Two youth services were held on Sunday at our Campden Park church where Ormond Alexander is the pastor. About three hundred attended the morning meeting, filling the sanctuary. Brother Bob said the Spirit of the Lord was felt strongly, especially during the congregational singing. He said the saints sang the traditional hymns with all their hearts, and it was very moving. For the sermon, he took his text from Jude 3 and exhorted the congregation to “contend for the faith” as the Apostles did.

The afternoon service concluded the convention. In addition to the congregational singing, each branch church shared a music special or testimony. From our Fancy church, two young girls sang “Ten Thousand Reasons.” Then a man from our Greggs congregation testified, stating that his son had fallen out of a tree the day before and was in the hospital. He said though the devil tried to take his son, He knows God is in control. He then sang “I Know My Redeemer Lives.” From our Paul Over church, a youth ensemble sang “Can’t Give Up Now.” Then another youth group, from Lowmans Hill, sang “At the Cross.” From Questelles, a lady sang “Hosanna in the Highest.”

The last special was contributed by Benjamin Haynes, pastor of our Gorse Estate church. He sang “The Blessing of the Lord.” The lyrics are taken from Proverbs 10:22, “The blessing of the LORD, it maketh rich, and he addeth no sorrow with it.” For the sermon, Brother Bob took his text from Matthew 13:44-46 and encouraged the congregation to make wise investments in their Christian walks.

The Downeys have enjoyed their time among our churches in St. Vincent, and will now travel to St. Louis, Missouri, for Midwest special meetings. 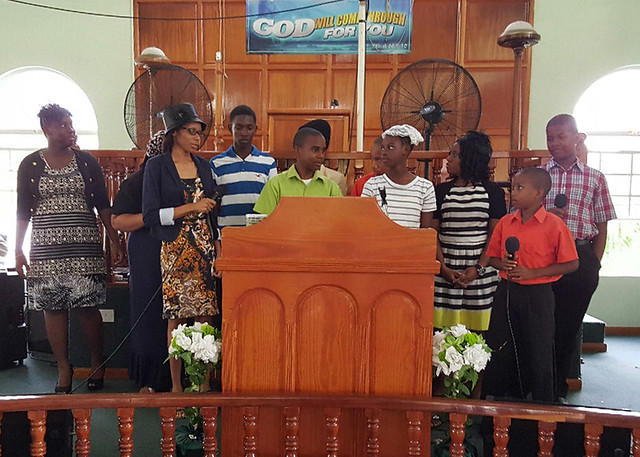