On Friday we traveled to the village of Umuokatawom in Abia State, and first went to the Apostolic Faith campground, which offers housing for district camp meetings and is also the home of an Apostolic Faith Secondary School. As we approached the grounds, students from the school lined both sides of the road, smiling and waving flags. They were grouped by classes, with the youngest first, and all had a part to play in the welcome. Some sang, others presented flowers, and the oldest ones led the way into the school, marching and singing as they went. Inside, we enjoyed more songs, and then had the opportunity to meet with the principal in his office and tour the grounds.

Our next stop was to an area about five minutes from the Umuokatawom church. Here, we visited the site where missionary George Hughes, who helped pioneer the work in Africa, stayed during his first trip to Nigeria in 1948. The elderly woman who now lives on the property remembers Brother George, and we were able to spend some time with her.

Next, we proceeded to the Umuokatawom church for a reception followed by an evangelistic service. A large crowd met us outside the church, and a young girl in her Sunday best came forward with a bouquet of flowers. Inside, the children sang and presented a short skit depicting Brother George on the day of his departure. In effect, he said, “I have planted, now others must water.” The skit brought out that since that time, the Abia District has grown to include twenty-one churches, eighteen Bible study centers, and five Sunday school centers. It concluded with an admonition to continue praying for the work. Following the skit, the children marched out singing, “This is my commandment, that you love one another, that your joy may be full.”

The church service included many inspiring music selections. To open the service, the orchestra played, “Praise Ye the Lord.” The choir sang several songs throughout the service, including “All Thy Works Praise Thee, O Lord” and an anthem in the Igbo language: “Bianu Kele Chukwu,” which roughly translated is “We Welcome God.” A male quartet offered “Say to the Righteous It Shall Be Well,” and before the message, a mixed quartet sang “We Plough the Fields.”

In the evening, we traveled to the regional headquarters church for Ikot Enwang for a reception and evangelistic service. We were greeted out front by a small delegation including three young girls who presented flowers. After we were seated inside, the Sunday school children marched in singing “Come and Rejoice” and then gave a short welcome program before marching out again.

The church service began with the orchestra playing “Praise Ye the Father,” and then the choir accompanied by the brass sang a medley of familiar hymns including “My Anchor Holds.” The tabernacle is immense, and was filled to capacity with some seated in the gallery as well.

It was wonderful throughout the service to hear a loud chorus of “Amens” coming from the congregation during the opening prayer, testimonies, and sermon. The response to the altar calls in every service has been great, with the altars being filled with young people seeking the Lord.

Tomorrow, we expect to be at the Lagos headquarters church in Anthony Village for an early morning workers’ meeting followed by the Sunday services. 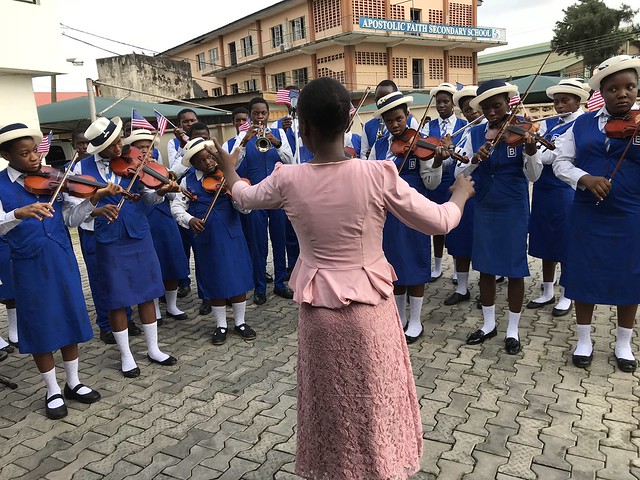