Bringing Needs to the Lord in Northeastern Romania

Harlan Lee and Jeff Downey have returned from visiting our churches in Romania, and sent this final report from their trip.

We left Ramnicu Sarat on Saturday, accompanied by Ted Bora and Gheorge Macovei, and traveled to the city of Pascani in the northeastern region of Romania. Since 2013, we have been visiting this area and working with missionary Vasile Budeanu to hold cottage meetings in the neighboring thirty-five villages. As a result, several groups and churches have been established here.

Upon arriving, we first went to the home of Brother Vasile and his wife Mariana, and had a nice time of food and fellowship. Then we went to Vanatori Neamt and visited a home where several saints had gathered, as well as one unsaved man. We shared the Word with them and also had opportunity to pray with them. In the same village, we visited another home where we were asked to pray for a woman with cancer who is also in need of salvation. As we prayed for her several of the saints joined in.

We then visited a two-room house where many services are held. The saints here desire to build a church, and have even completed a foundation next to the house. However, they have been unable to obtain the permits, because the building is to be a church. We held a service in the house, and both rooms were packed. God’s Spirit was strongly felt throughout as we enjoyed music specials, exhortations, and a sweet prayer time. Afterward, we also had prayers of dedication for three children.

On Sunday morning, we joined the saints in Bosteni for a wonderful service. This church is the headquarters for our northern Romania work and is led by Brother Vasile. The service began with the congregation singing a hymn and continued with special music, including a number provided by Sister Mariana and her children. Two messages were heard, and then there was a good time of prayer around the altars.

In the afternoon, several of the saints from Bosteni accompanied us to Humulesti for a service. The pastor, Brother Boboc, warmly greeted us at the door. The church was soon full, and more chairs were added as others continued to arrive. We heard several music specials and then Brother Gheorghe welcomed everyone and encouraged the saints. Prayer and several more music specials followed before Brother Harlan and Brother Jeff each shared messages from the Word. After the service, a volume of prayer went up as the saints brought their needs to the Lord.

Brother Harlan and Brother Jeff are now preparing to return home after a wonderful time of fellowship visiting the saints in Romania.

(Mouse over the image below to click through album.) 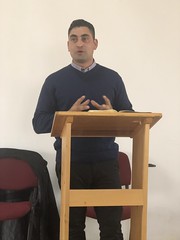