The 2019 annual youth weekend at the Apostolic Faith Church in East Bridgewater, Massachusetts, was held from May 31 to June 2. The guest speaker, Aboubacar (Bobby) Toure, the youth leader at the Lafayette Apostolic Faith Church in Brooklyn, New York, came with his wife, Anissa, and their children. Other attendees were present from branch churches in Atlanta, Georgia; Oceanside, New York; Philadelphia, Pennsylvania; Washington, D.C.; and Wharton, New Jersey. The theme for the weekend was “Choices,” and the theme song was “I Have Decided to Follow Jesus.”

On Friday evening, the service began with the youth orchestra playing “There Is a Redeemer,” followed by the choir singing “How Great Is Our God.” Several testified of God’s power to save, deliver, and keep. Before the sermon, Lily Segres, from Atlanta, sang “I Will Serve Thee.” Brother Bobby took his text from Genesis 3:1-7, and titled his sermon “Dead Men Walking.” He exhorted the congregation not to listen to the devil because he does not have anything good to offer, and he reminded them that everything they need is in God alone.

On Saturday, more visitors arrived, bringing the total of attendees to around 120 people. There was a picnic and breakout sessions at Castle Island in South Boston, Massachusetts. The topic for ages ten and under was titled “What Will Jesus Do?” and was led by a member from the Wharton church. The session for ages eleven through fourteen, “God’s Blueprint for Me,” was led by Blessing Mbang from Washington, D.C. The singles aged fifteen and older had a session titled “Single, Waiting, and Praying,” led by Olulana Alofe, the pastor in East Bridgewater. The session for married couples was titled “Godly Homes,” and was led by Nathaniel Segres, the pastor in Atlanta. Following the sessions, everyone enjoyed grilled corn, barbecued meat, and other delicacies while relaxing beside the great Atlantic Ocean.

That evening, everyone met at the church for a Bible trivia game. Those who were under the age of forty, excluding Sunday school teachers and ministers, were divided into four groups. The participants were asked to fill in the gaps for Scripture verses, give the Scripture reference for various verses, and provide information on the Bible’s authors and other Bible facts. Group Four was the winner, and everyone in that group received a prize. Brother Bobby gave a short message encouraging the congregation to make the right choices, and to seek God for direction in their lives. A good prayer meeting followed, after which the young people enjoyed pizza and chicken wings.

The sanctuary was filled to capacity for the Sunday morning youth fellowship service, with over 120 in attendance. The orchestra opened the service with “Holy, Holy, Holy,” arranged by Elizabeth Adebayo from East Bridgewater. Then the youth choir from Wharton sang “Don’t Say No to Jesus.” The youth choir from Oceanside sang “Give Me Oil in My Lamp.” After the middle prayer and announcements, a male vocal group named “De Great Quintet” (Akinola Ogunleye, Joshua Odumosu, Joel Oni, Daniel Adewoyin, and John Adebayo) sang a medley of “I’ve Made a Covenant,” “Blessed Jesus, Hold My Hand,” and “Lean On His Hands.” Many stood to their feet to testify of victories made possible by their relationship with God.

Before the sermon, Esther Odumosu sang “Don’t Turn Around to the Things You’ve Left Behind,” ending with the theme song. Brother Bobby took his text from Acts 19:1-12, and spoke on “We Choose Power.” He admonished those who had received the baptism of the Holy Ghost to go all out for God and use the power they have received. He brought out that God is the same today, and the same power that wrought miracles in the Early Church and during the Azusa Street Revival is still available today. The Spirit of God moved in the congregation, and a powerful prayer meeting followed, which lasted for around two hours. Many blessings were received, including two people being saved, and another being sanctified.

The whole weekend was a great visitation from God, and the prayer is that all the blessings received will continue to inspire those who attended in the days to come. 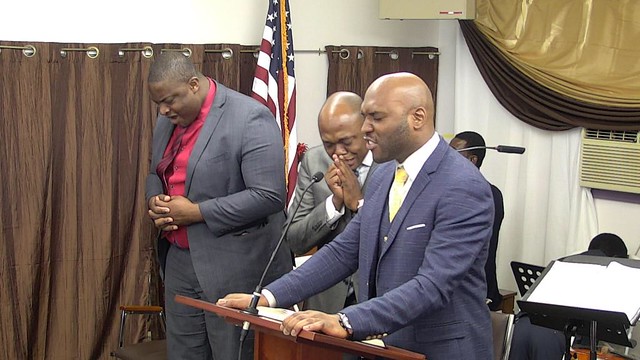