Finding Fellowship and Faith in Romania

Harlan Lee and Jeff Downey continued in Romania this past week, first participating in the final day of the ministers’ conference on Saturday, and then visiting several of our churches during the week. They sent this report of their activities.

On Saturday, we returned to the Zadareni church for the last day of the ministers’ conference. It began with a time of prayer led by Oliver Zan, the Bulgarus pastor, who read Psalm 135:1-3 and encouraged everyone to praise and thank the Lord as they prayed. At the close of the prayer time he also read 2 Timothy 2:15 and exhorted us to study the Word of God and ask for wisdom to rightly divide the truth.

The first session was presented by Brother Jeff who took his text from Psalm 62:1-8, and spoke on being steadfast. He said it is wise to pursue the things that bring stability to our faith, and avoid the things that cause instability.

Brother Harlan led the next session using 2 Thessalonians 2:13-17 for his text, and taught on the wisdom of being loyal to the Gospel as well as the Apostolic Faith teachings. He used many examples from the work in Romania to show how God has blessed this work and continues to do so.

The third and final session was given by Gheorghe Macovei, the Eastern Romania District Superintendent. He read from John 7:46-53, and noted that the Pharisees had knowledge of the Word of God, but did not apply it wisely. He encouraged us to seek the wisdom that is from the Lord. He also spoke on 2 Peter 5:3, exhorting the pastors to be good shepherds to God’s sheep.

In the evening, a service was held at the Sanpetru-German church where Nico Tudor is the pastor. It was a wonderful time of fellowship with many in attendance. The young people provided several music specials, and then two sermons were heard. The first was from 2 Kings 6:15-17, and focused on looking at life through spiritual eyes. It was a reminder that with God those who are for us are more than those who are against us. The second message was from Mark 10:3-16 and pointed out that deliverance, provision, love, joy, and peace, are all found in the arms of Jesus. A good time of prayer followed the service.

On Sunday, we visited three churches for services. In the morning, we went to Bulgarus and had a blessed time with several coming forward after the service to be anointed and prayed for. Afterward, we joined Brother Oliver and his family for lunch. In the afternoon, we traveled to the Teremia Mica church, which is pastored by Florin Silea, for a combined service with the saints from Comlosu Mic who are led by Viorel Farcus. One of the highlights of the service was the ordination as a minister of Cornell Ardelean. The Spirit of God was certainly present as we prayed over him, and a volume of prayer went up from the congregation. Following the service and prayer around the altars, we were invited by Brother Florin, his wife Rebekah, and his brother Beni to share a meal and fellowship.

Next, we went to Gottlob, where a service was already under way when we arrived. We enjoyed specials from the orchestra and brass band. Following two messages and a time of prayer, we were invited to the home of the pastor, Nicu Cretu for yet another meal.

On Monday we traveled to the Southern region of Romania to begin visits to our churches in that area while accompanied by Ted Bora, the Western Romania District Superintendent, and Brother Gheorghe. We visited one location, Capu Dealului, and had a time of fellowship with the pastor, Nicu Comanescu, his wife Helen, and their family.

The next morning, we went to Motatei Sat for a service. We were warmly greeted by the saints, including the pastor, Mitița Udrea. The service was wonderful with many beautiful specials, including a solo of “I Will Meet You in the Morning” by Brother Ted. We heard three messages and a great time of prayer followed, with many coming forward afterward to be anointed and prayer for. While we were there, we were thrilled to hear from a brother who said he had been prayed for during a previous visit, and God had miraculously healed him.

While in Motatei Sat, we became aware of a new convert in Craiova who needed prayer. He had been a car accident and not properly treated for a spinal injury. As a result, he has lost much of his mobility and use of his limbs. We had the privilege of visiting to encourage and pray for him.

In the evening, we traveled to Margaritesti for a service. We were heartily welcomed by the pastor, Aurel Cruceru, and the saints. We enjoyed another good service with the Spirit of God present. There were many good specials, including one by a woman who had attended the very first service at this location. Both Brother Harlan and Brother Jeff shared a message from the Word of God, and a good time of prayer followed.

On Wednesday evening, we went to the Craiova church for a service, and arrived early enough to receive a tour by the pastor, Pavel Balanoiu. He showed us that the construction of the second floor was coming along. The service was full, with many visitors from the area as well as from some of our neighboring churches. The young people provided several specials, and after two messages, we had an amazing time of prayer.

Our team traveled to the Eastern region of Romania on Thursday and participated in a service at our Bucharest church where Brother Gheorghe is the pastor. We were treated to several music specials by the young people, a ladies’ ensemble, and a ladies’ duet. Four sermons were given, and then a very good prayer service followed. Before leaving, we learned of a woman who had brought her young daughter suffering with bone cancer. We had opportunity to pray for her, and are thankful we serve a might God.

We visited the Ramnicu Sarat church on Friday for a service, and were warmly greeted at the door by the pastor, Ivanus Crivisiu. We had a great service with a good number attending. We heard beautiful songs and specials, as well as four messages, including by Brother Gheorghe, Brother Harlan, and Brother Jeff.The service concluded with a very sweet prayer service.

We have been very blessed by all of the services we have had the privilege of attending, and thank God for His presence and traveling mercies. 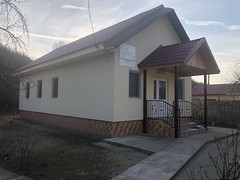