One Saved in Malawi Special Meetings

In August, representatives from the Malawi headquarters church in Lunzu made a trip to Nthondo Village, 120 miles to the south. There, they held a service among a group of thirty-five families interested in becoming part of the Apostolic Faith Church. Chris Nkhata, the Malawi District Superintendent, gave a report of the trip and also of September special meetings held in Nsanje, eight miles from there.

Brother Chris said the team from Lunzu traveled to Nsanje on Saturday, August 1, and were joined by the pastor, Danken Martin. The next day, they all went by motorbike through mountainous terrain to Nthondo Village. Arriving at 10:00 a.m., they were greeted by about twenty jubilant congregation members and the pastor, Maluwa Sandikonda.

They held a service outside under a large tree, and it began with the singing of several choruses in the Sena language. As the music continued, more people gathered until there were about forty in attendance. Brother Danken gave the announcements, and then Brother Maluwa spoke. He told how the congregation had prayed for this day and how they felt as Cornelius must have felt when he said to Peter, “Now therefore are we all here present before God, to hear all things that are commanded thee of God” (Acts 10:33). Brother Chris said the team was very humbled by this sentiment.

The sermon was titled “Living Faith” and was taken from Romans 10:8-12 and 17, and Mark 11:23-24. It focused on the power of the Gospel through faith in Jesus Christ to transform one’s life and give daily victory. Brother Chris said there was a wonderful atmosphere surrounding the open-air meeting as neighbors came out of their homes with chairs and stools to sit outside and listen. Afterward, they had a good altar service, and many who were sick went forward to be anointed and receive prayer.

The church service was followed by a business meeting to officially welcome the group into the Apostolic Faith family and discuss the path forward. The team left late in the afternoon to return home, and later in the month received a call from Brother Maluwa telling of some who had been healed and others who had been added to the church. Brother Chris commented, “We believe this is God’s timing for building His work, and we are just following the leading of the Spirit.”

On September 4, the team returned to Nsanje for three days of special meetings, which were well attended. In addition to the twenty-three from the Nsanje congregation, there were nine from Maraka, nine from Blantyre, and thirty-four from Nthondo Village. Brother Chris said it was especially touching to see the efforts made by those from Nthondo Village who had walked several kilometers to be in the services.

An evangelistic service was held Friday evening with Brother Danken preaching from Proverbs 28:13, which says, “He that covereth his sins shall not prosper: but whoso confesseth and forsaketh them shall have mercy.” God blessed the hungry hearts of those present, and a good altar session followed.

The next morning, a teaching was given on “Tithes and Offerings: God’s Finance Plan.” This was followed by another teaching given by Last Mateyu on “Being a Faithful Steward.” In the afternoon, a youth service was held with Hopeson Shuga bringing the message, and in the evening the pastor from Maraka, Brother Madi, preached on the “born-again experience.” Brother Chris noted that the messages constituted a good spiritual diet for those gathered.

The Sunday services began with Sunday school. Brother Mateyu led one class in a lesson titled “In the Beginning,” using the Search curriculum. Another class was led by Brother Hopeson, using the Answer curriculum. There was much interest, enthusiasm, and participation on the part of the students.

The morning devotional service followed with more than seventy in attendance. The sermon was taken from Deuteronomy 28:1-6 and 19, and Galatians 3:14, and was titled “God’s Blessings are Conditional.” It brought out that the blessing of Abraham came to the Gentiles through Jesus Christ. The altar filled at the close of the service, and a fervent prayer session followed. One prayed through to salvation, another received relief from evil spirits, and many were anointed and prayed for.

During the three-day gathering, a ministers’ meeting was held with nine in attendance. It was led by Brother Chris, while at the same time, his wife Ellen led a session for the spouses.

Brother Chris said there was a wonderful spiritual atmosphere throughout the meetings in Nsanje, and he has received many joyous messages from those who were blessed by them. He concluded his report with, “We thank God who graciously fulfilled our dreams in this very difficult pandemic period. Your prayers are required as we continue looking to God for grace and direction in seeking the lost for His Kingdom.” 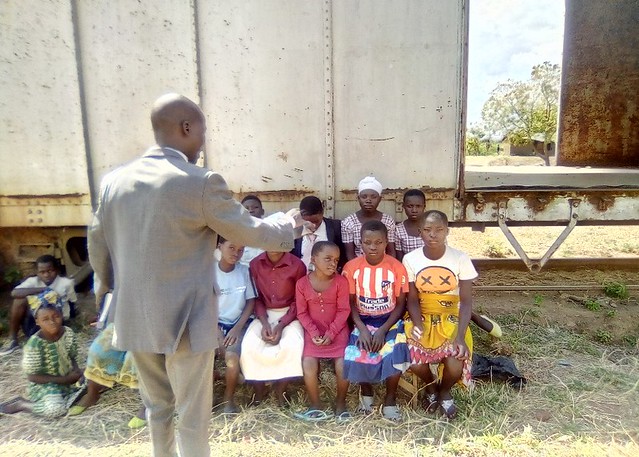