Harlan Lee of Roseburg, Oregon, and Jeff Downey of Van Buren, Arkansas, are in Romania for a ministers’ conference and to visit some of our churches there. They arrived on Thursday, February 13, and were greeted by several of the saints. Then they were hosted for dinner by Ted Bora, the Western Romania District Superintendent, and his wife and daughter, Emily and Emma Patricia.

The minister conference was held the next day at the headquarters church in Zadareni. It began with prayer and an exhortation given by Pamfil Focosi. He read Psalm 5:1-8 and encouraged everyone to listen to the Lord’s leading and ask Him to guide the meetings.

Following the time of prayer, Gheorghei Macovei, the Eastern Romania District Superintendent, welcomed everyone and introduced the nearly fifty delegates from nineteen locations. He also read a letter from John Musgrave, Director of Romania Work, encouraging those in attendance. Then Brother Harlan extended greetings from Portland.

Two of the morning sessions were led by Brother Jeff and focused on being a qualified and effective worker for Christ. He spoke about the need for salvation, sanctification, and the baptism of the Holy Ghost, and the changes that become evident in one’s life when those experiences are received. Throughout the two sessions, he also looked at the prayer life, attitude, appearance, and communication of an effective Christian.

A third session was led by Viorel Farcas, pastor of the Comlosu Mic church. Using James 3:13-17 for his text, he spoke on wisdom. He said some wisdom is of man, some is of the devil, and some is of God. He encouraged everyone to seek after the wisdom and leading that is of God.

In the afternoon Brother Harlan presented two sessions on the attributes of God. He said that God is omnipresent or always with us, omniscient or all-knowing, and omnipotent or all powerful.

For the next portion of the conference, presentations were given by the different delegates on the progress of the work in Romania. Among the reports, Aurel Cruceru, the pastor at Maragaritesti, thanked God for providing the youth at his location with musical instruments, and for enabling them to fellowship with the saints in Craiova. Also, Nico Tudor, the pastor at Sanpetru-German, shared that at a recent water baptismal service, there were so many visitors that the sanctuary filled to capacity and the crowd spilled over into the courtyard outside.

Another report was from Vasile Budeanu, our missionary to the Pascani area in Northern Romania. He said that in the past four years, the work there has been blessed with forty-five converts, including eighteen families. Now the congregations are putting together a second team of workers as they continue to evangelize the area.

In the evening, a church service was held for those attending the conference, and the local Zadareni saints. The attendees were treated to several specials by the Gottlob brass band as well as a vocal special by three of the brothers from Pascani.

Brother Harlan and Brother Jeff wrote that it was a wonderful day with many blessings, and they are looking forward to what the rest of the trip might hold. 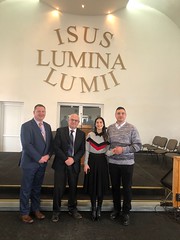