The Eastern Caribbean camp meeting was held Sunday through Friday, July 14-19. Following is a report of the week’s activities.

In the opening service, Michael Anthony, the Eastern Caribbean District Superintendent, welcomed everyone, and later gave the first message. Taking his text from Hebrews 11:1-4, he spoke on “A People of Faith.” That evening in a youth service, Samuel George preached from Revelation 7:9-14, posing this question to the young people: “Are You Ready?”

Evangelistic services were held each evening Monday through Thursday, and the saints had opportunity to hear a variety of sermon topics from visiting ministers. On Monday, Rolland Deler, the Haiti District Superintendent spoke on “The Last Week Is at Hand,” referencing Daniel 9:23-27. On Tuesday, Pearl Smith, the pastor at East End, Tortola, encouraged everyone to “Stand,” using texts from Galatians 5:1, Daniel 3:18, and 1 Corinthians 16:13. Wednesday’s message, taken from Acts 19:1-7, was given by Edsil Parris, pastor at Tichbourne, Barbados. He asked, “Have You Received?” Thursday, the focus was “God Is Our Only Source,” taken from John 4:13-14; 3:27.

In the mornings, different activities were held each day. On Monday, the congregation viewed a webcast from the Portland camp meeting. It was a teaching on “Holiness in Our Beliefs and Values” given by Bob Downey, Director of North America Work. On Tuesday morning, a church service was held, and many testified to having been blessed or healed. Earlier, during the prayer session, one brother had received the baptism of the Holy Ghost. A presentation on sanctification was given by Brother Michael on Wednesday, and proved to be helpful in answering some individual’s questions. On Thursday morning, the youth enjoyed special activities and a service.

For the final evening of the camp meeting, everyone gathered for a concert, and representatives from the different branch churches attending joined in providing music specials.

The next morning, as the delegates began to depart, many expressed joy over being able to come together for fellowship once again, especially since last year’s camp meeting was cancelled in the aftermath of storms. 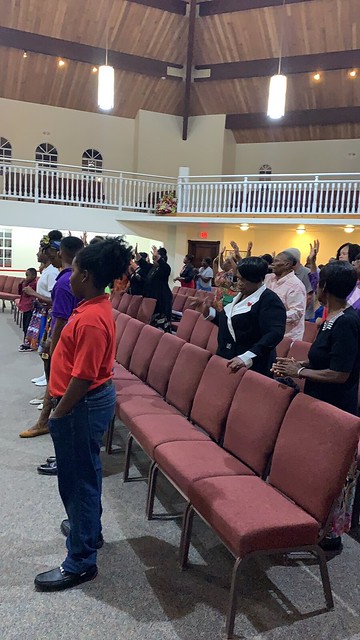