Continuing in Nigeria on Friday, I traveled with a delegation from the Western and Central Africa (WECA) headquarters to the Ikot Enwang regional headquarters campground. We were greeted warmly upon our arrival with a bouquet of flowers and short welcome. Then we went to a conference room for a presentation given by the regional directors on the progress of the work in Ikot Enwang, Port Harcourt, and Enugu. The report was inspiring, showing that the Gospel continues to move forward in these areas where we have nearly three hundred churches.

In the evening, an evangelistic service began with a children’s program. As the congregation of about 2500 looked on, the children marched in swinging their arms and singing “In the Name of Jesus, we have victory.” Stopping in front of the platform and facing the congregation, they sang “Happy Welcome to You.” Then a young lady greeted everyone with the exhortation, “Let us listen to the Lord to receive His blessings.” Several children recited psalms before more songs were sung including “Is Everybody Happy?” and another that sweetly implored, “At the close of the day, when you kneel and pray, will you remember us?” The program concluded with the children marching out as they had come in, this time singing “The Church Is Marching On.” Following the program I had opportunity to extend greetings from Portland, and assured the people that we do pray for them.

The church service featured beautiful music throughout. Among the highlights was “Power in the Blood” performed by the orchestra as part of the prelude, and several numbers by quartets. A brass quartet played “Faith of Our Fathers,” a mixed quartet sang “God’s Wonderful People,” and before the sermon, a male quartet sang “Come, Sinner, Come.” The sermon was taken from Luke 15:20-28, the parable of the Prodigal Son. It brought out that both of the sons in the story were estranged from their father—the younger son who left home and went deep into sin, and the older son who stayed, but became bitter and angry. God in His infinite love and mercy is calling after anyone in either son’s position to repent and be reconciled to Him.

For the Sunday services, we returned to the WECA headquarters church in Anthony Village, Lagos. Sunday school began with a children’s program. The students, who were all dressed in lavender and black, and carrying balloons, marched into the sanctuary singing “Let’s Be Happy” and filled the area in front of the platform. They sang several more songs interspersed with recitations, including “This Little Light of Mine,” which was preceded by a young girl inviting everyone to “Let your light so shine before men, that they may see your good works, and glorify your Father which is in heaven” (Matthew 5:16). At the close, the children marched out singing.

The morning devotional service was filled with wonderful music. It began with the orchestra playing “Crown Him” and continued with the choir singing in Yoruba “Ope Lo Ye O,” which in English is “You Are Worthy.” The choir also sang a powerful “Stand By Me,” featuring soloist Tony Ademuyiwa, and before the message, a mixed quartet sang “Teach Me, Lord, to Wait.” The sermon was taken from Romans 1:14-16. It emphasized the need to take responsibility for sin and repent upon encountering the Gospel, rather than to hide in shame. Repentance will remove the shame and replace it with eternal life and joy. At the close of the service, many went to the altar to pray.

In the afternoon, a workers’ and ministers’ meeting was held, and the main topic was the importance of proper conduct.

Today, I arrived in the Republic of Benin, and plan to visit several churches here over the next few days. 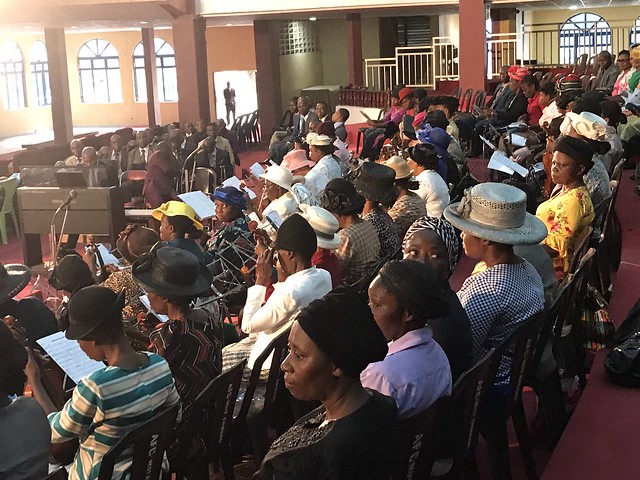