The Easter Sunday service in Kawasaki, Japan, included a celebration of the risen Savior, the water baptism of three recent converts, and the retirement of Pastor Hidehiro Ouchi. Some of the highlights are shared in the following report received from the Kawasaki congregation.

It was a blessed day; we felt God’s presence with us in the service as well as for the future of the Gospel work in Japan. Forty-one people attended in person, and about twelve more joined us from other countries via an online platform. The countries represented were Nigeria, South Korea, the United Kingdom, and the United States.

For the Easter message, Brother Ouchi, who is eighty-five years old, preached his last sermon as pastor of the Kawasaki church—a position he has been serving in for over fifty-eight years. He took his text from Luke 24:1-8, and throughout the message, shared experiences from his life. He closed by saying, “I am thankful God has been my Shepherd for sixty-five years.” Following this, we sang “Yesterday, Today, Forever.”

The water baptismal service was held next. In Japan, there are few Christians in the general population, so we greatly celebrate these occasions with gifts and flowers. This year, we are so thankful for the salvation of three saints. After they were baptized, each was given a certificate and gift. Then, in keeping with a congregational tradition, they were presented with bouquets of flowers by a sister who was baptized last year on Easter. The candidates were blessed by the whole experience, and everyone rejoiced with them.

Lastly, we acknowledged Brother Ouchi’s retirement by celebrating his many years of service. He has been the Kawasaki pastor since October 14, 1962. His wife, Sumie, was also acknowledged for her faithful service—the two married in December of 1962. Upon hearing of this retirement celebration, many people sent letters, including the children of missionaries Arthur and Miriam Allen and several district superintendents. While most of the letters were shared privately, those from Superintendent General Darrel Lee and Director of East Asia Work Bill McKibben were read to the congregation.

Brother Ouchi then gave us a heartfelt greeting and shared his favorite memories of Brother Allen, who was instrumental in his conversion and in the founding of our work in Japan. He also spoke of the start of the Kawasaki church. He said that in the beginning, many people who lived near the church were only interested in the English lessons given by the missionaries, but God used the opportunity for eternal purposes. Many people came to know Jesus through that outreach and were saved. Even today, there are several older saints in the congregation who were converted in those days and remain faithful. We all rejoice that we can continue with the next step forward in faithfulness to God.

Sister Ouchi also spoke, giving a warm greeting and expressing gratitude for God’s love and leading over such a long period of time. Following this, Brother and Sister Ouchi (pictured above with their family) were presented with a lovely bouquet of flowers and a special gift of a wooden shield engraved with Scripture.

Many prayers of thanksgiving and appreciation were prayed on this special Easter Day, and we earnestly request for those prayers to continue to support the work in Japan. To all who continue to love and support the Japanese saints with prayers, we share a warm thank you: “Arigatou Gozaimasu.”

With Brother Ouchi’s retirement, the Kawasaki church Board of Directors will assume oversight of the work in Japan. We are thankful that the young people are accepting the challenge of continuing the faithful example of Brother and Sister Ouchi in sharing the Good News of the Latter Rain Gospel taught by Apostolic Faith churches around the world. 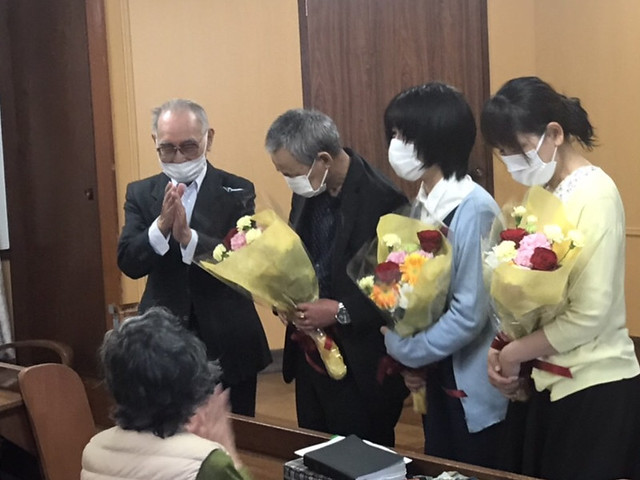